Posted on June 30, 2017 by sherrijeanmccullochart

I reread the book a couple of weeks ago and saw it in a completely new and incredulous light. Vonnegut was a genius! After a good long while of reflection and contemplation, he’d found an effective way to express his experience with PTSD during it’s most intense moments of his life. I was memorized as I read and unraveled the symbolism. I understood the layers of voice and how necessary it was to relay that untethered, unembodied state  that happens on the journey. I understood that he needed to understand and share his ironic, terrible, destructive story to make sense of it, and that curiosity, the need to understand, was probably the thing that saved his life.

I’m pretty sure almost nobody understood ‘shell shock’ in the sixties, though they may have 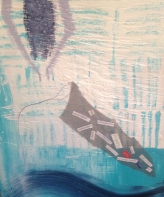 recognized it’s wrecking ball power. Many sufferers saw the bottle or the needle as the only means of escaping it’s incapacitating power. Has that changed any in 40 years? Not much, but we’re beginning to have conversations about PTSD and other mental illnesses. That’s the beginning of change. Naming something leads to understanding. Understanding leads to destigmatizing.  Destigmatizing leads acceptance and support. Acceptance and support are necessary for healing. Healing, not escape, needs to be the clearly communicated goal for anyone with PTSD.

← When the Universe is With Me…
Art Heals →

This site uses Akismet to reduce spam. Learn how your comment data is processed.